The church was bathed in gold, I was almost blinded by the light reflecting on every centimeter of the walls. The feeling was much different from the dark and almost mystical churches in the north of Europe. When I managed to open my eyes, I was baffled. There were boats everywhere. Boats in the wall mosaics, dramatic paintings of storms, and even dozens of miniature boats hanging from the ceiling. 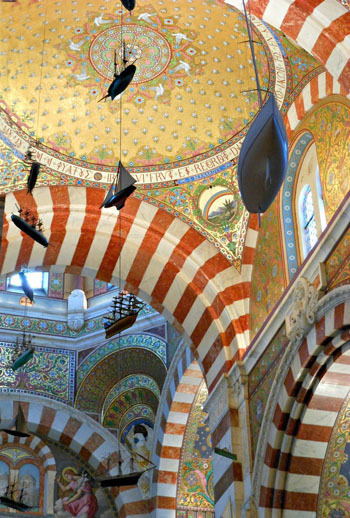 As I was trying to wrap my mind around it, an old lady, a British tourist, leaned over and whispered in my ear: “these are ex-votos”. She paused for a moment and silently contemplated the confusion I was displaying, and then continued “when sailors are caught up in a storm, they pray to Notre Dame, and if they survive, they commission paintings, or craft small replicas of their boats. The old fishermen in Marseille still say ‘If you really want to learn how to pray, go to sea’”.

As much as the paintings are intimidating, they show something of great importance: When a storm is at the horizon most people stay ashore or, if out at the sea, steer towards a safe haven. Many start praying. Only very few set sail towards the storm. These are the “crazy” guys. Not only some sailors are rebellious people. Entrepreneurs I work with, have quite some similarities: they sail into the storm despite all warnings, not blindly but determined.

As an investor I am particularly interested in this type of personalities.

Some time ago a successful founder told me that her board is unhappy with the company’s performance and with her personal performance. The founder was happy to acknowledge the challenges she is facing but has no intention to jump the ship. She is eager to fight, sailing even harder towards the cold wind, putting all cards on the table.

Where is the difference between fearlessness and putting everything in danger?

Who can best guide you taking the risk?

Who can help you to stay calm?

Starting a venture is like sailing into a storm

The best sailors know which wave they can sail through and which one they sail around. Also great entrepreneurs know how to mitigate risk. They prepare for worst case scenarios, are able to think through alternative paths. There isn’t always a shortcut, but if there is, great founders will think it through.

The best sailors think about the status of the boat first. Without a boat there is no transatlantic victory. Great entrepreneurs don’t put themselves first but the company. You can only win, if you don’t collapse halfway through the destination. It’s about the equipage, the co-workers, the advisors, everyone who invests her time and emotions into the project. You need to carry your responsibility, you need to be a captain not an officer.

The best sailors start navigating in another sea for the first time (maybe at the other side of the globe) only after seeking advice from other experienced sailors, either local, or those who have been in these waters often, and asks about specifics regarding waves and wind. What seems like a routine procedure for sailors, still hasn’t sunk into the mind of many entrepreneurs.

Often, when the pressure is high, when the mental load is unbearable, sometimes sailors and founders alike stop asking for help. Believing in single handed success always ends up in chaotic hurricanes. But, like the sailors in Marseille, is all they have left praying for a miracle? There is always a way out. Ask for help!

There is a way to avoid hitting the wall, ask a successful founder.

There is a way to avoid a founder clash, ask a successful founder.

There is a way to pivot to success, ask a successful founder.

Ask successful founders for help, they’ve all been there.

Some people will sail to the next island. Some people will go through the storm. Accept that only very few are prepared to jump on the ship with you. Accept that you are taking a huge risk. Accept that what you do is who you are (and yes, you should definitely read the book). Be prepared for the worst case and get advice from people who did it themselves. Get an investor that supports you. Get support from someone who is determined as you are. Embrace the storm. Calm the storm.

I came to Marseille in 2002 to sail a regatta in a small catamaran. Most of the participants were french sailors. It felt clearly impossible to win against all the local knowledge and experience, the Mistral was blowing our mind. Overwhelmed by a fleet of 164 competitors we stuck to a very simple strategy - staying calm. We concentrated on our strength (boat speed) and tried to cover our weakness (sailing in strong winds). We followed the local champions until we got the slightest chance to overtake. In the end we could take home the 5th place behind 3 french boats and one from UK. We did not become world champions but we beat the storm, our storm, we won against 159 competitors.